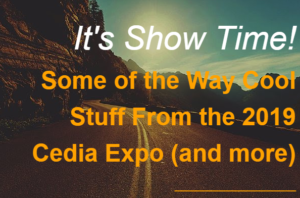 Dateline, Denver -Things are happening in the world of electronic fun and convenience. This month marked the 2019 CEDIA Expo, a huge affair where 20,000 custom A/V industry pros gather to see what’s new, cool and different in our world. Roughly 500 exhibitors packed the Denver’s Colorado Convention Center.

There’s definitely some new stuff coming down the pike. You’ve probably gotten a whiff of 8k TVs already, but there’s plenty of other stuff, too.

For example, unnoticed water leaks cause hundreds of millions of dollars of damage every year. If you have a vacation home or frequently travel, you may have returned to discover a new piece of lake front property in your great room. Automatic devices that can sense and stop such calamities and notify you or other authorized persons made a CEDIA appearance this year.

Lasers continue their push to be the dominant video projector light engines, a more of them made their appearance at the show. Laser advantages are simply too big to ignore, including near limitless life, great color rendition, with impressive brightness and contrast measurements. All in all, they mean sweet image quality for upwards of 30,000 hours. Anyone whose lamp decided to die right before the big game or cinema party can really appreciate that kind of lifespan.

A couple of years ago manufacturers started pairing laser light engines with super short throw projectors. Yep, they’re kind of like what you see in a school classroom, except with stellar images.

This opens up a huge world of ultra-large image possibilities when you don’t want to hang a projector off your ceiling, or plop it in the middle of your floor, where it gets walked in front of. Instead it’s placed in a piece of furniture and the projector is only 2 feet or so from the image. It looks like a traditional credenza, AV cabinet or book case.

This tech was formerly reserved for those who could throw new small sedan money at it. There were several manufacturers showing short throw lasers at the Expo for prices approaching big screen TV dollars, so we think they’ll start showing up more often when you’re not at the school’s open house.

If projector ad screen combos don’t float your boat, you’ll be happy to hear that mammoth flat panel and super thin direct-view displays started popping up like toadstools after a rainstorm. In fact there was a One Hundred and Ninety Inch Screen! Yeah, that’s about twice what we used to call the biggest, and all that stuff is perfect for the ole man cave!

You know most TVs are a 16 x 9 aspect ratio, right? That means they’re 16 units wide and 9 units high. Think back to that cross multiplication stuff you learned in middle school. Well, Sony showed a TV that was 16 x 9… feet, that is! Yep, 16 x 9 feet, which pencils out to roughly 220 inches! You can finally sell your season tickets. You’ll have to, that thing runs about $1,000,000!

For all the hubbub surrounding (pardon the pun) TVs, many studies have shown that much of a person’s movie enjoyment stems from a truly realistic and dynamic surround sound presentation, and yes that’s true even if you’re not an audiophile! In fact, it might be even more true.

To that end, he last few years have seen new surround formats movie makers can use to wow audiences, and they certainly haven’t disappointed. It’s enough to make your skin crawl… in a good way, of course! But it’s true, the realism and dimension it adds to movies is nothing short of astonishing.

This year there were more gobsmacking home theater demos at the show than there have been in a long time. Manufacturers even showed Dolby Atmos and DTS-X multi-channel systems with more than the traditional 11.4.2 or 11.2 channel count; much more.

In fact, we’re talking a surround sound system with 30 separate audio channels! That may be overboard for most home theaters, but there was no denying the realism from those demos was nothing short of astounding. Yep, even your non-audiophile friends would be asking for our phone number! You don’t have to be an audiophile to get goosebumps from uber-realistic movie sound tracks.

Many audio manufacturers have aimed at delivering that kind of dynamic audio in smaller and smaller packages. Improved materials and computer engineering have come together to create some pretty remarkable speakers. One German manufacturer at the show bucked the trend though, demonstrating a 32” subwoofer. No, really, 32 full inches!

Just as we are getting used to 4k, the industry is doubling down, with the big three TV manufacturers all putting 8K at the top of their high performance TV lines. What’s the point, when most 4K content is reserved for movies on disc (Yes, they still exist and are actually the highest quality AV) or streaming content from Netflix or Amazon?

The point is that with all of those pixels, large images look much better, even if they are not using native 8k content. The sheer pixel count, plus the high quality electronics required to drive them, paint stellar images you won’t be able to tear yourself away from.

As hyper-fast Internet is offered from more and more providers, Wi-Fi is often left scrambling to keep up. Even WiFI that was beyond adequate just a few years ago can fall short of delivering anywhere close to what your new Internet may deliver. Performance issues that were invisible when Internet speeds were a pedestrian 100 or 200 Mbps can now rear their ugly heads.

Wireless access points must be faster and are more bothered by building construction and interference problems. In many cases you’ll also need more access points to get super-fast speeds throughout your property. Immensely fast speeds come with relatively short ranges, so you can’t stray as far from your access points and expect to enjoy them.

Contact us now and we can discuss anything cool from the show or check out your WiFi and make sure it’s ready for anything when you are. 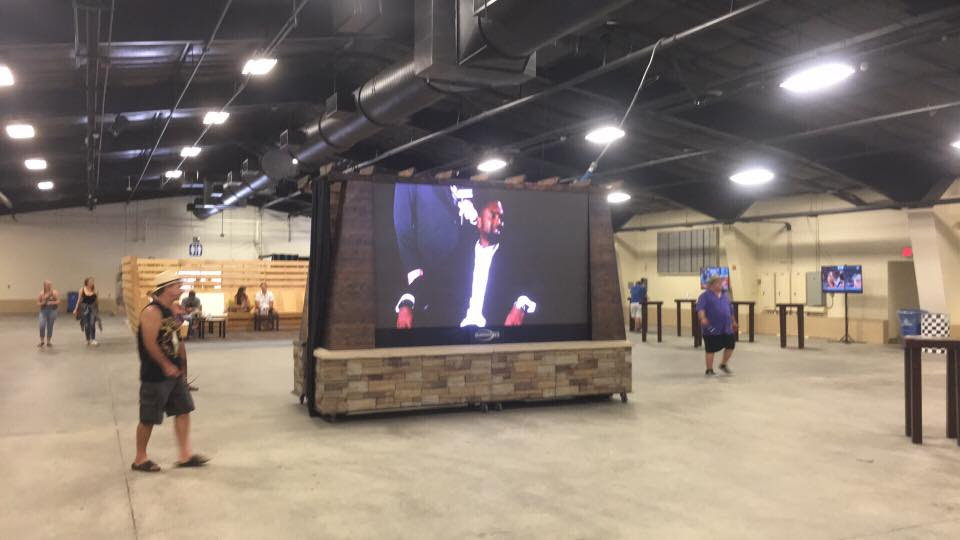 Drop us a line and let’s chat.